[Please note that some of the entries are very old.*]

It's just about impossible to keep up with Igor's updates, and usually, I don't. I mention them in "Latest" (top right of this page), and that's it.

The July update requires  some more attention, I think.

In earlier versions, CafeTran's spell-checker - Hunspell - required running OpenOffice, LibreOffice, or NeoOffice for "check spelling while typing". Those office suites opened automatically when you started CT. No problem. The only restriction was, that you couldn't increase the RAM assigned to Java to more than 2 GB (unless you run the suite under a Linux distro, the only version in 64 bit so far). So in the case of very large TMs, you had to choose: Either use the spell-checker and limit the RAM to 2 GB, or increase the the RAM an do without spell checking while you type. This latest update changes that. Spell-checking now works independently from an office suite, so you can have your cake and eat it too.
Please pay attention to the following:
The path to install the dictionaries is a bit longer than you may think it is. You should install in the "resources" rather than the "Resources" folder. 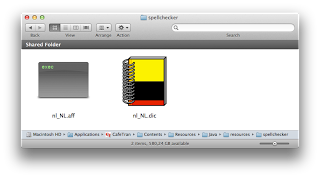 Please check here if your dictionary is available. The list is quite long, and you would think most languages are covered, but Turkish turned out to be left out. Very strange, it's not exactly a minority language (see UPDATE below).

"Every disadvantage has its advantage", Johan Cruijff used to say. This renders quite a few blog entries completely and utterly useless (thank you, Igor…).

CafeTran, for all of us!

You can try CafeTran yourself. Download the free fully functional trial version by clicking the icon above.