[Please note that some of the entries are very old.*]

My first CafeTran (test) translation is a very short text in .doc format. You can download it here. To be able to import the text in CafeTran, I'll have to convert it to XLM. Word:mac 2004 cannot do this, and I'm not prepared to buy Office:mac 2011, so I'll use Open Source software for this task. We'll see later that we will need an Open Office Suite version anyway, so you'd better start downloading…
Open Office offers free cross-platform solutions that are as good as or better than Microsoft Office. However, there is a Mac-only version that I use, NeoOffice. Another possibility is LibreOffice, developed by the people who originally wrote OpenOffice. It's also cross-platform, and even though I think LibreOffice deserves our support, I'm afraid I haven't tried it out yet.
So I open my doc in NeoOffice, and save it as XLM: 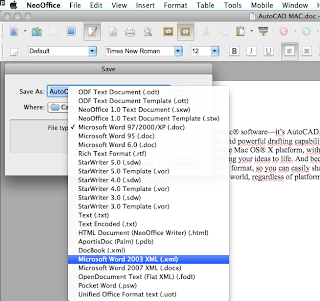 Click to enlarge
By the way, I could also have saved it as .docx.
The next step is setting up the project, so I'll run Cafetran.jar. As far as I can see, Start.jar also does the job.
Click "Document:", and import the test document. The other settings speak for themselves: 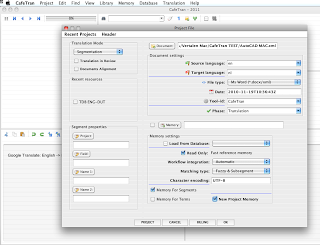 Click to enlarge
Now save the project. I mean, bloody SAVE the project. The first few times I tried CafeTran, I just didn't. One of the switcher problems, I suppose.

*Because of a comment below on file locations, I added a pic that clearly illustrates that: 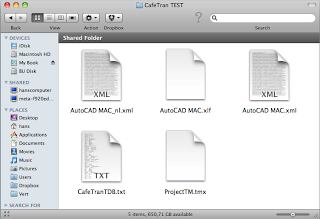 Click to enlarge
(I added the file CafeTranTDB.txt for one of next week's entries)
Geplaatst door Hans

CafeTran, for all of us!

You can try CafeTran yourself. Download the free fully functional trial version by clicking the icon above.